It´s a mumbling, jumbling, roaring, exploring, rambling, scrambling, all in a raw huddle,

when Hugger-Mugger mess around and make music.

Hugger-Mugger consists of the artists Maria Hägglund, Elinor Ström and Catarina W Källström. In 2001 they released their first double-CD Begging for Boogie at Klubb Vardag.

The noise performance group Hugger-Mugger started to perform from the inside of an ordinary wardrobe, prepared with a lot of loud-speakers. The show also included aerodynamical effects, smoke-cusions and sparkling fireworks. All fired off from the roof of the wardrobe. 2003 they decided to come out from the wardrobe. With microphones attached to a guitarr-amplifier they investigated their bodies in an intensive-rythmic-erotic way.

Hugger-Mugger have also made several sound installations at galleries and festivals. They have put two hundred woopie-cusions in the middle of a frequent road and broadcast from a gigantic radio in cardboard. They have also been on a cd at Venize Biennal, have had a radioshow in London, made performance at the Demilitarized Zone in Korea and have been writing autographs in Vevring, Norway.

Fiber Art Sweden (FAS), is a network of artists working with textile means, methods and practices that promotes discussion and change in the extended textile field. FAS was founded in Stockholm in 1998.

The term “fibre art” represents a free and innovative artistic exploring of fibres, being a contemporary art form drawing upon textile traditions and modes of production.

The extended textile field is characterized by an infinite range of possibilities and options, in which FAS uses a nomadic and mobile strategy. Continuously and consistently, FAS actively has searched for new and unknown spaces and situations, looking for new positions and collaborations.The website www.fiberartsweden.nu is the virtual exhibition space and showroom for the network, and functions as it´s only stable location. Here members show their work, and the site also functions as a channel for information both within the network and outwards. There is an archive over exhibitions, seminars, discussions and other activities where members have initiated or participated in. 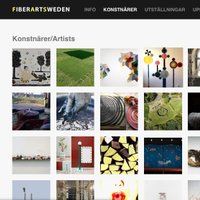 LARM documents and put forward women active in sound art in the Nordic countries. Through the LARM project we are making a contribution to the historical record of sound art. LARM has focused on the activities of women in sound art because we could find no coherent information or documentation about it in books about the subject. This together with what we could see of the scene of active women in contemporary sound art, gave rise to the project.

LARM arranged a festival and an exhibition of sound-art in Stockholm’s Kulturhuset March - April, 2007. At the festival the book LARM From mouth cavity to laptop: the sound of Nordic art, a double CD and the Internet archive on LARM’s web site were launched.

The LARM manifestation is supported by the Stiftelsen Framtidens Kultur (Foundation for culture of the future) and the Nordic Culture Fund.

Bombax bombax is a happy and almost entirely new record label; we are based in wild, wild Skårve and peaceful Stockholm, Sweden.